We had a most wonderful Burns Supper at our house last week. It was a super small affair -- just my parents, plus two couples with Scottish last names. We don't want to force our obsession with Scotland upon the un-Scottish, you see.

I spent the afternoon making vegetarian haggis, neeps, and tatties. I've been seeking a great veggie haggis recipe for years. I've never seen a quick recipe, and often it seems like a lot of work for not a great payoff. This year, however, I loved the result.

I based it off of the vegetarian haggis from Henderson's, a fantastic all-vegetarian restaurant new my old flat in Edinburgh. (And yes, there are lots of all-vegetarian restaurants in Edinburgh, so quit your mocking, you bullying carnivores!) I even got out my food scale, so as to cook according to weights and grams, but was foiled when my food scale is based on ounces, not the Metric System. Doh! But as with anything I do, I won't follow directions precisely ... creativity takes over, and I ended up making it my own. 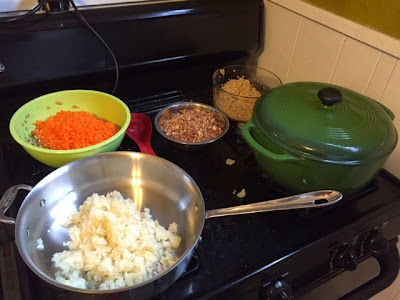 It was a delicious meal, even if it required the use of all of our various bowls. I prepped/chopped the veggies up in the morning while the lentils were soaking, so by the time came to just toss them in the recipe, I felt like a cooking show host. I must say, despite having lived 33 years dishwasher-free, I was ecstatic to have a dishwasher after this meal (thanks, David!).

I cooked the veggie haggis in a large saute pan, and I used a dutch oven for the neeps and tatties.

I'd planned on quadrupling the Henderson's recipe, which, again, is what I based mine on. It's naturally gluten-free if you use gluten-free oats, and easily made vegan by subbing margarine for the butter. Here's what I ended up using, which makes 16 servings:

1. Saute garlic and onion in a wee bit of vegetable oil for about 5 minutes -- do not brown. Add  garam masala and tamar.
2. Add brown lentils and carrot. Here's where you want the lentils to get soft -- if they are not, then simmer until they are. My mixture looked too dry, as if there was no way the lentils could soften with that little moisture. I ended up adding about 1.5 cups of vegetable stock, stirring constantly, and cooked this mixture for about 40 minutes longer than I'd intended. I think this could have been avoided if I'd just soaked the lentils longer before starting the recipe.
3. Once the lentils are soft, add the mushrooms and cook for about 5-7 minutes.
4. Add the kidney beans, butter and salt & pepper.
5. Add oatmeal to the mixture and stir it all up! As Henderson's says, "The oatmeal should retain its texture to give body to the haggis."


In the past, I've made haggis that was more meatloaf-like (or "nutloaf," I suppose you could say). This one was a little less solid than those. I ended up making a Shepherd's Pie out of the Potatoes and the Haggis. If it had just been us, I would have also put a thin layer of rutubaga between the tatties and the haggis, but with company, I opted to play it safe. Not everyone cares for rutubagas. But if you're into making a Shepherd's Pie, then:

6. Make mashed potatoes however you like to do it. (Boil tatties. Drain. Add butter, milk, and so much salt. Smash them up.)
7. Spread haggis into a 9x13 pan.
8. Use a spatula to spread mashed tatties on top. If you want the top to brown, make peaks with a fork. Sprinkle some cheese on it for extra yumminess. Bake at 400* for 40 minutes. 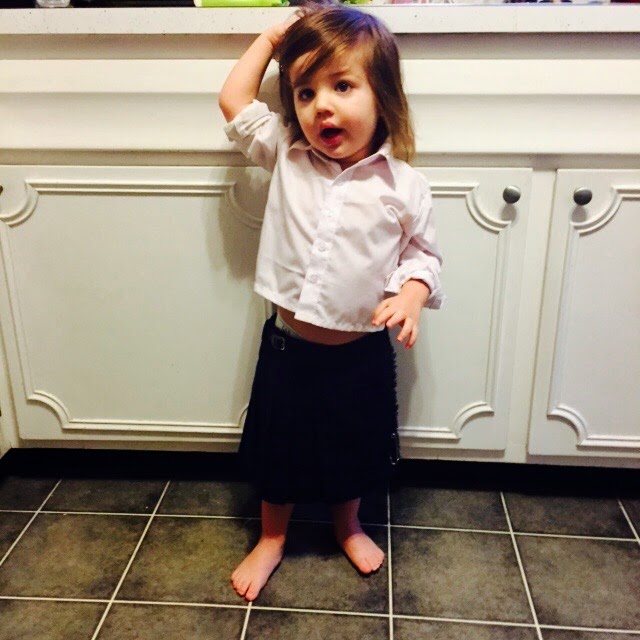