The best gig I ever had.

After I graduated from NYU, I got a job offer from a major television network. The only caveat was that the pay was $22,000 a year (with no health insurance or other benefits). And yes, the job was in Manhattan. Such a salary meant I couldn't afford to live anywhere in New York City, mostly because no landlord would rent to me unless I made forty times a month's rent.

Just when I was ready give up and move back to Kentucky, a former boss made me what I considered an absolute dream offer: I could live in the basement of her garden apartment on the Upper West Side rent-free in exchange for helping out with the kids. 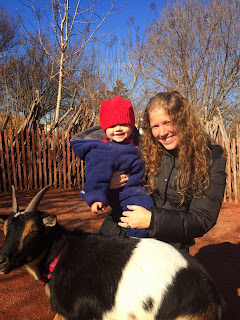 I could still keep my television job (she worked in TV too, so understood the occasional late-nights or weird hours), as the family had a daytime nanny as well, but I would be there in the early mornings and the after-work hours.

It must have been so nice for them to have a built-in babysitter, even if it was just for after the kids went to bed. If she and her husband decided they wanted to go out to dinner or a movie, they could just check if I was in for the night (I usually was because, um, I made $22,000 a year in New York City, so who could afford to go out??). They always had a college-educated, CPR-trained, nice girl from Kentucky, who totally adored their kiddos, available. I had free cable and a furnished room. I had two really cool and smart grownup housemates (though I usually kept to myself because I was still kind of shy). And I had two really fun kiddo housemates.

Nowadays, I totally dream of finding the perfect person to put up in my basement bedroom. Someone who isn't at all a full-time nanny, but could babysit a few set hours each week. Mostly, I dream of someone who could be sort of on call -- someone who just might happen to be available if I wanted to, say, go to the gym while the baby took a nap. Or go to the grocery without bringing a diaper bag. Or pop out for a post-bedtime nightcap with my husband. Or play with the baby while I wrote a new song.

Sigh. Maybe instead I should just look for a family who wants to let us move into their basement.