More oversharing from me. 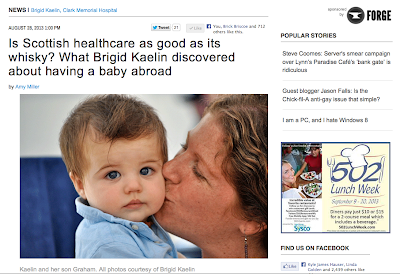 Yet again, I've overshared in public, and it's gone more viral than almost anything I've done musically. A writer for Insider Louisville (who has her own fab blog here) interviewed me about my experience with the NHS, and I was blatently honest.

It's funny -- and tragic -- how completely shocking my experiences are to most American women. Maternity care like this should be the norm, not the thing you have to fight for and pay for and still don't really get.

I have so much more to say about this, but truthfully, the last sentence of the article sums it up for me. I just don't understand why more and more people aren't outraged. I don't understand why it seems the people who are the most vehemently against socialized medicine are the ones who would benefit the most. I wish all Americans -- myself included -- could just get over our founding principle, which seems to be: I don't need you; I can do it myself!

How's that for mature?

Anyway, it's my blog, so I can rant and rave and then some.
No comments:

I got this email from TheBump.com this morning called "7 Annoying Moms You're Sure to Meet." Things like this make me crazy on many levels, but mostly because I feel like it just perpetuates competitiveness among women and encourages them to hate on each other. Besides, I'm pretty sure everyone and everything is annoying to a new mother. The only thing that's not annoying is a glass of red wine and a massage.

Anyway, it reminded me that I'm probably a very annoying mom. I try not to talk about our parenting choices unless asked (but yes, I'm about to tell you on this very public blog, so see? I'm annoying.), and I really don't care what you do with your own child. We all have our priorities when it comes to, well, everything, and parenting is no different.

One of our choices is a strict No Screen Time rule. We don't own a television. This is not some rebellious hippie choice (or some obnoxious "I heard this story on NPR the other day..." comment). Our television was stolen while we were in Scotland, and we haven't had the money to replace it. I've also read a bazillion things about how babies learn much better from interactions with actual people as opposed to with screens. So our choice has been to not allow the boy any screen time whatsoever.


That said, we were very well aware that at some point, we were going to need a break. At some point, we would reluctantly, but with great relief, plop him down in front of a television or iPad to keep him busy or quiet while we regained sanity or cooked dinner.

We decided that time was last week. We were going on a road trip and the wee boy HATES his carseat. Tears. Whines. Screams. For the entire time. Unless someone is back there actively playing with him, and even then, he still cries most of the time.

So we downloaded some movies on a tablet and decided it was time for him to watch the evil screen. We knew we couldn't handle hours and hours in a car with screams.

And guess what? He hated it. He looked at it entranced for about 30 seconds before knocking it away. I tried again. And again. I tried to FORCE MY BABY TO WATCH CARTOONS, and he was having none of it.

It was a really long road trip, friends.

That's what I get for being an annoying mom.
No comments:

People have been asking me when I'm going to come out with a children's album for over a year now. I'm not quite there yet -- I've got several more adult albums in me first (well, not "adult" as in X-rated, but just not songs about farm animals) -- but I am up to something kid-friendly. Starting tomorrow morning, I'll be leading the Family Music Jam at Mama's Hip. It's a drop-in class ($10), and everyone with kiddos is welcome. I really have no idea what to expect as far as the age range, but there will be something for everyone.

I taught a Baby Sing & Swim class this summer, so I'm already in the zone as far as singing with the wee ones. BUT now that I'm not going to be teaching in the water, I've got a bit more freedom as far as instruments and songs go.

What are some of your favorite singalongs? What do your kids like to sing? Any fun songs that involve movement? I've got a list going, but I'd love to hear your suggestions.

If you haven't been to Mama's Hip before, you really should. Owner Shannon Stone has done so much for the community, and it's a really great store/space. No matter your parenting style, it's a great resource.
No comments:

Road trip! DC, VA, and beyond.

We've been renting our house out here and there for extra income over the summer. This time, rather than crowd my parents by staying with them, we opted to rent a car and hit the road. I'd only been on one trip since Christmas, and if you know me at all, you know that just doesn't cut it. I've never had much expendable income, but I've also never bought a piece of new furniture. Give me a plane ticket over an armoire any day.
So far we've visited friends and family in Baltimore, DC, Alexandria, and Annandale. Today we are headed to Asheville, where we will get our hippie on because that's apparently what you do when you're in Asheville.
Im going to sign off now because I'm blogging from my phone in the back seat in our car. And I get carsick in the backseat even when I'm NOT playing on my home. Best to go... 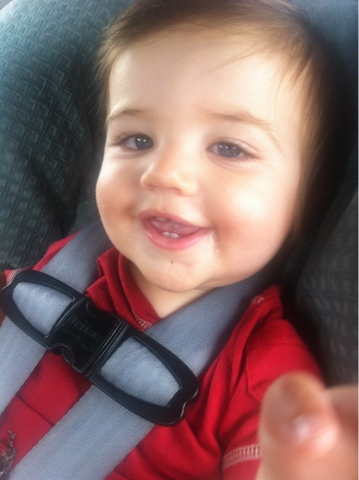 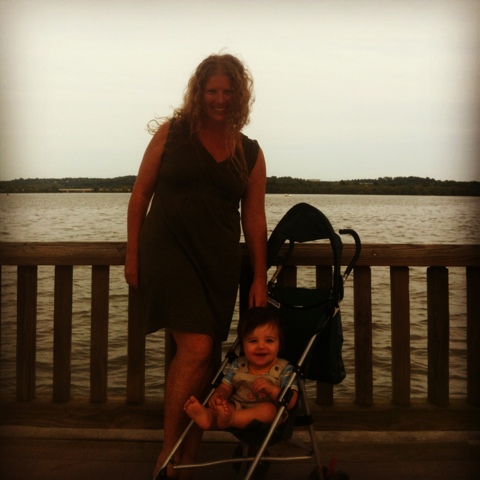 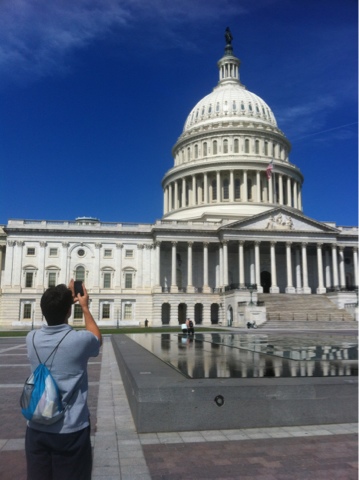 Email ThisBlogThis!Share to TwitterShare to FacebookShare to Pinterest
Labels: Travel

My Experiences on Nursing in Public.

August is breastfeeding awareness month, so there have been LOTS of controversial posts on Facebook about it -- particularly about nursing in public. Why it's controversial remains a mystery to me, but I still have lots of fools on my Facebook feed (maybe you?) who don't understand "why you don't just cover up?"

I'm not going to address that here, however.

Instead I thought I'd share some positive stories about breastfeeding, seeing as I've recently seen so many posts about women being asked to "do that in the restroom" (would YOU eat on the toilet?) or "use a blanket" (come on, it's August!).*


Do I give off a "don't mess with me" kind of vibe? Or have I just been really fortunate? I'm not saying this kind of discrimination doesn't occur. It obviously does, and it is completely disgusting. But in light of Breastfeeding Awareness Month, I just thought I'd be Pollyanna.

Also, for about half a second I thought maybe I shouldn't post a picture of me breastfeeding. Then I realized that it's completely normal, that you can't see anything, and that there are a lot more revealing photos of me out there on the interwebs.

*In the United Kingdom, it is illegal to ask a breastfeeding woman to leave a public place -- subject to up a £2500 fine.

Summer was canceled this year.

I feel really bad for the kids who had to go back to school this week. This summer has been crap. I know, I know, you LOVE the cool weather and the storms. Sure, all that rain was crazy, and the lightning was fun -- it doesn't do anything like that in Scotland. But, much like the first snow of the winter, it was only fun the FIRST TIME.

I taught a baby swim class in July and August, and it was only sunny for ONE of the days. On one of the days, it was downright COLD.

Kentucky, this is NOT what I signed up for when I came home to you. You promised me a few months of nasty, dripping, heat and humidity, and I feel totally cheated.

But enough complaining about the weather. Instead, how about a cute pic from swimming class?

Introvert guide. This explains a LOT.


Most people assume I'm a huge extrovert because of my very public career and stage persona. It's true, I'm super comfortable behind a microphone, and I can turn on the extrovert button at a cocktail party if need be. Truthfully, however, I go absolutely mental if I don't get adequate alone time, and if I don't get an hour of alone time before a gig, i'll be a basket case when set loose on the crowd. I am pretty sure part of my difficulty adjusting to motherhood is that I'm rarely ever alone these days.

A friend shared this a few weeks ago, and I thought I'd post it here as well. If you have ever wondered why I seem distant or rude when I walk into a room, read this. I'm not intending to be rude at all, but I do need some time to adjust to the alone-zone to the social-zone.

These images are some of the best I've seen (and I've seen a LOT lately) of capturing this Guide to Handling an Introvert.

Lucid Dreams and my new diet.

I'm sleeping a little more these day. It's still not much because even when G makes it to 5 am, some neighborhood dogs start yapping non-stop right about then. Not sure how I never noticed that before, but I guess that's because I was not usually awake in the five o'clock hour.

I have been taking advantage of one of my superpowers: lucid dreaming.

What is a lucid dream? It's a dream in which you are aware that you are dreaming. I thought everyone did it, but apparently not. I've used it as long as I can remember to do one of two things: magic or travel.

When I was little, I would use my dream-state magical powers to blink and changes the walls of my room or to make lots of puppies appear in my backyard.

These days, I generally travel in my dreams, and most of the time, I travel by flying like Superman. Last night I flew through the streets of Manhattan by magic carpet. It was pretty fab, if I do say so.

Recently -- and I don't know why I never thought of this before -- I've taken to using my lucid dream powers to eat anything I want. 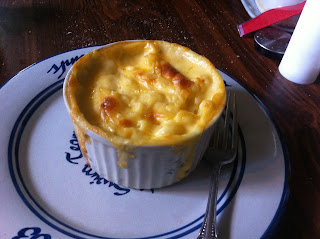 Sure, nursing still burns extra calories, but I've had to give up a lot of foods I love while I'm nursing the wee boy, in particular anything dairy. I've tried sneaking dairy back into my diet lately, but the boy still gets sick when I eat it. (Oddly, he has no problem eating dairy on his own, but when I eat it and he nurses, he pukes. Cheeky boy.) A few nights ago, however, I was dreaming about my dad's macaroni-and-cheese (you would dream about it too if you'd ever tried it). I suddenly became aware that this was a dream, and then I ate an entire casserole of it. I could taste it and everything, and it totally satiated my craving. How's that for a superpower?

Now if only this boy would keep up the 6-hour stretches, I might start having ice cream sundaes every night.