Interview in The London Diaries. 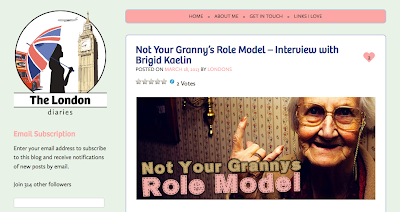 In case you didn't learn enough interesting facts about me yesterday (smile, please), here's an interview I did for another ex-pat's blog. Stephanie lives in London, hence her blog Stephinlondon.com.

Reading fun blogs likes hers makes me wish I could pull myself out of these baby blues and get back to what I love: writing. Steph has done a series of blogs for International Women's Month, and you should go check them out.

Here's the interview about me, where I babble about ex-pat life, EX-ex-pat life, and feminist issues.
No comments:

Brigid the bassist. And we're in the paper!

Tuesday night I went over to my friend Peter Searcy's studio and played some music. Even more fun, I played BASS for him. It's weird, but that was the second time since I got back that someone has asked me to play bass. I mean, I can play the bass, but I would never consider myself a bass player. I've got to say, though, I didn't suck. And I kind of liked it. 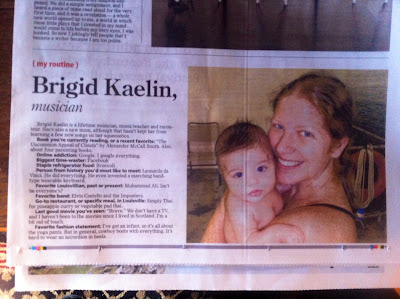 Time to get the ol' bass out of storage and start a new career. It's definitely a lot lighter than the accordion.

Also, in case you didn't see the Louisville newspaper, voila! Me and the wee boy.
It's nice to know y'all haven't totally given up on me. I'll be back soon enough. Working on booking an actual live, full-band show.

Conclave!! I know that I'm not the most likely person to be obsessed with the papal election, given that most of my knowledge of the Vatican come from a Dan Brown novel, much like most of my knowledge of Christianity comes from Jesus Christ Superstar. (Seriously though, I think Angels and Demons is a great read, and I don't care if you roll your eyes at that.) 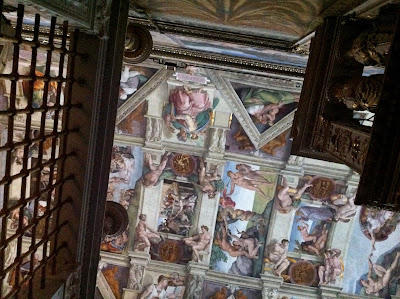 Anyway, I woke up at 4am with the baby, and my first thought was, "Ooooooh! It's 9am in Italy. Conclave time!" If our television hadn't been stolen (along with David's cowboy boots and all of our booze), I would have absolutely been up watching live coverage at St. Peter's Square. Instead, I got a little bit more sleep and have had this on in the background since I woke up for real.

I thought I'd publish my photo of the Sistine Chapel ceiling -- one that probably looks exactly like the one you took when you were also trying to be sneaky and break the rules. It's a pretty awesome building. The coolest part (to me, anyway) is imagining Michelangelo hanging all upside down on scaffolding. I also think it would be pretty distracting to have all that magnificent art on the walls and ceilings during conclave. But then, maybe that's why I'm not a cardinal.

In my many google searches this morning, this was my favorite tour and informative look at the Chapel and conclave:


And if you need to watch live coverage, here's my favorite site:
2 comments:

This article was sent to me by multiple friends and family members, who all have excellent senses of humor. It's kind of a travesty, but thousands of litres of scotch were accidentally flushed down the drain by mistake while some workers were cleaning equipment. Oops! That's worse than when that farm in South Africa accidentally released 15,000 crocodiles into the wild back in January.

Why did they send this link to me? Well, not just because they know I love whisk(e)y. If you don't follow my music, you don't know that I've got a song called "Whisky in the Faucet," a daydream about a similar accident.

If someone out there would care to make a YouTube video for the recorded tune, I'll give you twenty bucks. Instead, here's a live version of me singing that song at the Musicport Festival in England.

And because music is free nowadays, I might as well give away the recording from my first studio album. I think if you click "download," you should be able to get it in whatever audio format you wish. Savor your whisk(e)y, my friends!