I saw someone really famous today. 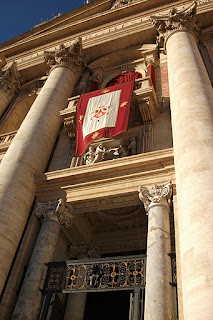 This morning I had front row seats to a big event for the first time in my life. David and I are trying to think who might be a bigger deal to see (he suggested Bono, but I think it was in jest). Who was it? The Pope! I know, I know, it's not fair that a woman who's never been to church in her life (except for weddings and that one time in high school when I went with a friend whose house I'd spent the night at, and I walked out just after they told us all Jews were going to hell, and one time in Lubbock for a perfectly pleasant Christmas Eve service that was mostly Christmas carols -- I like Christmas carols -- and zero anti-Semetic statements) gets front row at the Pope's Christmas Day blessing. Karma, maybe?

David and I didn't have anything else to do today (we agreed and adhered to the NO PRESENTS rule), so we figured we'd wander down to the Vatican this morning. Yesterday it took us two hours to get from city centre to our hotel, so we left at 8:45 am. Apparently commuting is much faster in the morning. We were in the Vatican by 9:30, had already wandered through St. Peter's Basilica again -- this time with a fully 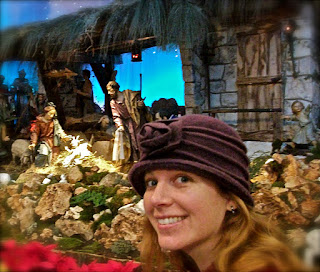 constructed Nativity scene, complete with that creepy Baby Jesus with the golden spears coming out of his head that they kept showing on the Midnight Mass feed yesterday -- and didn't know what else to do. So we just decided to read our books in front of the barricades directly in front of the Papal Balcony of St. Peter's. A crowd slowly built up behind us.
We waited for two hours for Benedict XVI to arrive, but it was totally worth it. His sentiment and speech were both lovely, and the sense of history was huge.

I have two favorite parts: I particularly liked when groups of people would cheer (as in the Ukrainians when he spoke in Ukraine), and the Pope would be a bit surprised and give them a little shout-out of a wave.

More than anything, though, I loved the Swiss Guard. Sure, their costumes (David tells me they are called "uniforms," but whatever) were brilliant, and their pomp undeniable. They wielded swords, spears, and spats, and marched heroically to the piazza beneath the balcony. The Italian army looked great as well (and their marching band was bigger), but the Swiss just had some sort of magic about them.

I may not be the most religious girl in the world, but I can get on board with thousands of people gathering to hear messages of peace and love in many languages -- even Esperanto (please enjoy this William Shatner film shot entirely in Esperanto). Also, I'm betting that at least 40% of the people there today weren't even Catholic. It was still a sight to behold. Much pomp and plenty of circumstance.

Anyway, check one more thing off the lifetime To Do List: See the Pope in person. Also, this kid's Flat Stanley better win some award ... Merry Christmas! 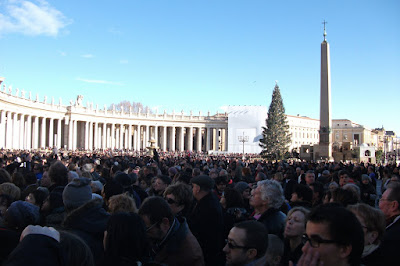