People keep trying to introduce me to Americans. It's not that I have anything against them; I mean, some of my best friends are Americans. But it would be a shame to live in Scotland for a year and come home without any Scottish friends. The sad thing is that I've lost some of my extrovert-ism over the past year. Many of you are probably laughing, but truthfully, my tendencies are to hole up in a corner and not talk to anyone. My stage career has allowed me to cheat the shyness, but it's become harder as I've been performing less.

Last night I took deep breaths (and half a xanax) and went out -- by myself -- to meet up with a group of Edinburgh women. A few of them I followed on Twitter, but we hadn't had much interaction there yet. They call themselves the Edinburgh Cake Ladies, a moniker that bore such resemblance to my LetThemTweetCake friends (@Tweetcakelou) back in Louisville that I felt obligated to attend.

Like everything else, it's one of those events that I'm really glad I went to, despite my bizarre nervousness in the beginning. I peered through the window of Bon Papillon, a charming art gallery/tea shop in New Town, and saw about twenty-five women laughing and eating cake. Not too intimidating, right? And at least I've got the American angle. That's always something to talk about. 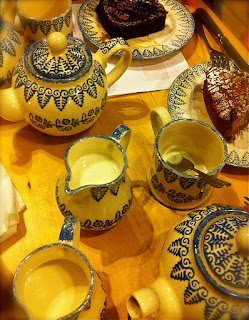 They were perfectly lovely people, and the conversation at the table I joined alternated between Twitter and cake. Oh, and of the KitchenAid Mixer of course, which at least one woman was amazed I had. Except that I don't actually have it here, of course, so maybe they thought I was lying.

Several women had iPads showing all the different cakes from their previous meetings. I'm going to have to step up my decorating skills if I want to compete. But then, something tells me it's not a competition, and that the lumpy-but-delicious birthday cake I made for David last week might be accepted just as graciously as the rolled cream ginger cake iced to perfection.

If you are interested in the Edinburgh Cake Ladies (or want to join up), look at my blog roll to the right of this post and click on their blog.

But enough talk about cake. I've got a show tonight!

Voodoo Rooms on West Register Street
doors at 8:30, show at 9:00 (£8 at the door)
The Saturnalia Cabaret Show
(i'm just the singer)

Oh, and Happy Thanksgiving, to all you immigrants in America. That's pretty much all of you (except 1/8th of Tyra).