What I can do now that my parents are gone 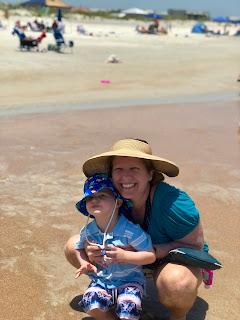 I'm trying to exhale fully, but I'm still not quite able to do that. For those who are concerned, I'm off the benzos, and mostly feeling ok. I'm still irritable and impatient and will likely always struggle with depression, but an odd sense of freedom is settling in.

I'm trying hard to let go of any feelings of guilt because I'm pretty sure I've seen enough tweets about therapy to know that everything you feel is normal; there is no right or wrong way to grieve; etc etc. Sadness is a given, but what I did not expect to feel was liberation.

I knew I'd feel relief when they died; their particular cancers were extraordinarily painful and difficult to watch. It had been a long few years of never wanting to leave their sides, but also of not being able to plan anything.

I turned down a Broadway role in a national touring company because that six-month tour was during my mom's "six months to live" prognosis. I guess it turns out I could have taken the role and Mom would have lived another year (though would she have? Maybe it was me being here and advocating for her so fiercely that helped her live longer). Anyway, there were lots of postponements and fly-by-the-seat "plans" that we just had to deal with because nothing was predictable. We had to stay close.

Suddenly, there is nothing holding me back.

Not long after my dad's funeral, the boys and I piled in a rented minivan and took a last-minute trip to Harry Potter World. I turned off my phone for a week because all of my family was with me. For the first time ever, I was not dreading a phone call.

Now for the even bigger sense of freedom, and writers out there, this might be particular to you (or maybe not?), but imagine what you could write if you knew your parents would never read it.

It's funny how the knowledge that my parents read my tweets would censor my language. (I know, you're probably thinking, "She's been holding back?!?" but yes, I have.) It never affected my songwriting, which I think is funny, but my prose, essays, blogs, etc ... I just never wanted them to worry or take on any more than they needed to. I don't have anything particular to shout from the rooftops now that they are gone, but I am looking forward to writing without consequence.

Though I suppose I should think about my children reading this someday ... maybe I'm not as free as I thought :)

UPCOMING public shows: July 19 at Prohibition Distillery in Louisville, Kentucky - opener at 8p, then my band! $5 cover and  NEW VENUE in town! wowie zowie.August 1 at Belladrum Festival in Inverness-shire Scotland, United Kingdom****Support my writing and music by buying me a cuppa tea!Follow me on Spotify &  Instagram  & Facebook  & Twitter  Follow my brilliant son Graham on InstagramOr randomly Venmo me a dollar for a coffee refill $brigidkaelin