Reflection and a thousand gigs 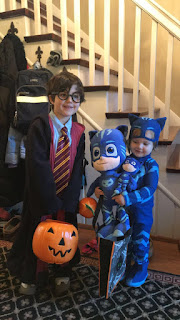 This is the week of THIRTEEN GIGS! Fall is a gloriously busy season for musicians like me in this area -- events galore and musicians like me just looooooove to sit in a corner and entertain (or sometimes even be the main attraction if that's your thing).

I've been a little distracted in my head lately, as you perhaps can imagine. Losing my mother is still pretty unreal, and I'm sure I'm in the denial phase of things. Last night I saw an adorable photo of my boys in Halloween costumes, and my first instinct was to text it to my mom. Things like that make me sad. My dad was over at our house to watch the boys get dressed, though, so that was sweet.

This weekend I'll be playing 5 private events and 3 public ones. The ones you could attend are:


It's highly possible that I'll be in the band at one of the swanky events you're attending this weekend, however, so pay attention to the musical entertainment. If you see me, say hello. If you don't see me, then smile at the band anyway because know that they loaded in a LOT of gear and arrived hours before the event and will be loading out hours after you leave. They work hard, those crazy musicians!

My goal for this blog over the coming weeks is to regale you with amazing photos from my Switzerland and Austria trip this summer. That trip was kind of overshadowed by my mother's death, so I haven't uploaded photos or told you the incredible story of visiting the home where my great-great-grandparents lived in rural Switzerland.
1 comment: Links to this post 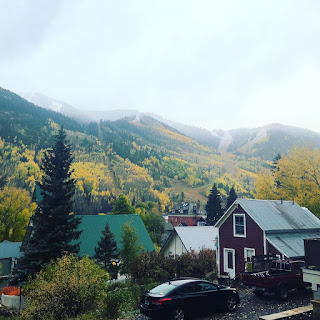 This blog has suffered because I've had life going on -- something I understand never goes away (well, until it goes away permanently). Living in the present hasn't been the best advice, somehow, because the present wasn't wonderful. Also, there's something odd about purposefully trying to savor the moment or make a memory because it then leaves that memory always slightly tainted, akin to the old psychology Hawthorne Effect, but about memories instead. Still, I have tried to embrace the positive. It just doesn't really change feelings in the way I was promised. I'm glad I snuggled my mommy until her last breath, but those moments were still absolutely awful.

Telluride was a nice escape, a chance to delve into a different part of my brain -- less emotional, and more intellectual. It was a chance to sit around with brilliant creatives, and each either had a fascinating story to tell or had such confidence that they believed their story to be important, thus making it so. That sounded wrong -- each story was important, but I suffer from Imposter Syndrome, thus often keeping quiet because I assume everyone already knows whatever it is I've discovered.

Anyway, I do wish I had the confidence of a white man, but so does every woman I know.

The Original Thinkers festival/conference/magic was a beautiful weekend, not just in setting but in camaraderie. There were films, performances, talks, lunch meetings, cocktail hours, ping-pong parties, gondola rides, brunches, random conversations on 8-seater plans that made me swoon with the possibilities. It was the most diverse lineup I've ever attended, and it's obvious that the curators worked intentionally to not have white male panels. The women made the conference, taking the stage with power and PowerPoint to share stories of not just the underprivileged, but the completely disempowered -- people living in wartorn countries, campsites in Africa, downtrodden but not downhearted.

I particularly enjoyed meeting Jane Ferguson, Yael Lavie, and Roopa Gogineni (whose new film is playing in LA today if you are around the area), who are brilliant minds going into dangerous places to tell the stories of real people.


Also, HUGE kudos to the festival organizers, who absolutely nailed it. I've been to many a conference/festival, and this one was incredibly well-planned and executed -- from everything to swag bags to event times and, of course, event quality. Thank you for including me. It was a huge honor!

And now some random photos of the weekend: 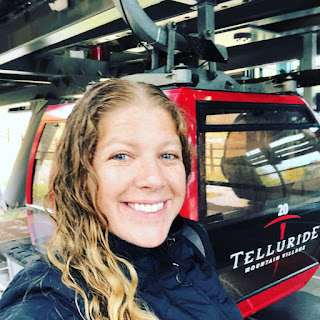 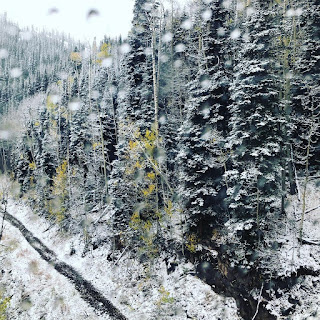 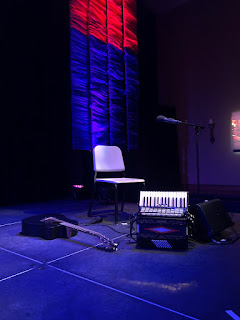 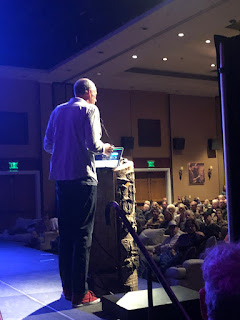 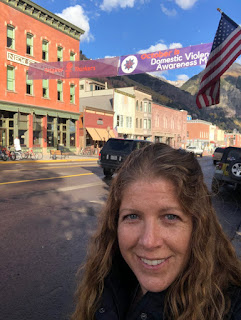 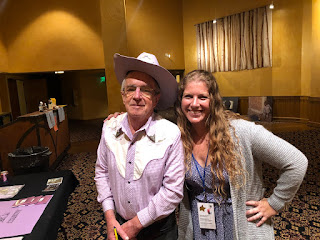 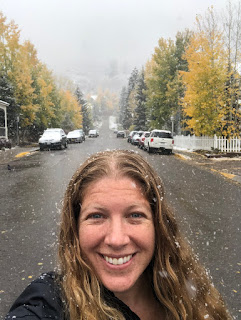 I don't normally advertise for other companies, but the folks at Republic Bank have always been kind and easy to work with and I love a local business. Also, look how adorable my wee boy is!

Greetings from Telluride, Colorado! Though I’ve been to many other mountain towns in this beautiful state, I’ve never been here before, though I’ve never visited Telluride. I’m here this weekend to be a part of and perform at the Original Thinkers Festival, the brainchild of David Holbrooke (formerly of MountainFilm). I’m beyond thrilled to be here, but the timing is particularly poignant for me, being less than a month after my mother died.
I haven’t grieved properly. I type that, and yet I know it’s wrong to say. There is no "normal" way to grieve, or rather, everything is normal, right? It comes in waves, it comes not at all, then it comes in a tidal wave of guilt because I hadn’t thought about it for a bit. I’ve got the rest of my life to grieve, however, so I’m trying to throw myself into my passions for the time being.
Travel is passion, and obviously so is music. So is meeting new people, talking big ideas, and trying to generally be a better person. Colorado seems to hold all of those things. No one looks at you strangely when you bring your own straw or bamboo cutlery set. The expectation is to walk rather than drive. Rather than get a plastic takeaway bag, you ask for a basket and promise you’ll bring it back. And you do. People use cloth napkins and they recycle -- as a norm, not as the weirdo on the block. Electric bikes, scooters, and, yes, a Tesla or two because it is a fancy part of Colorado after all, are not there for bragging rights, but because it’s a way to do our part. 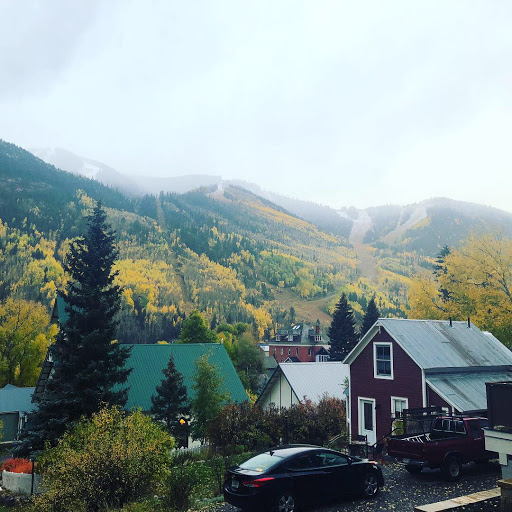 I like it here.
Last night I flew into the wee Telluride airport on an 8-seater prop plane. I used the barf bag. I felt like hell. Then I walked out and was picked up and chauffeured to my housing in a brand new Tesla Model X (the kind with the Delorean doors!). I chugged a few glasses of water and continued to feel like death until my hosts force fed me a bowl of rice after which I perked up enough to get excited about punctuation.
I then followed orders to drink a few glasses of water and go to bed -- and despite waking up thrice in the night to pee, I felt great when I woke up. Refreshed and ready to walk three dogs in the mountains.
I’m finishing up this blog after an evening at a hideaway fancy restaurant somewhere you can only access by either skis or the Knight Bus (I took the Knight Bus). There was a bluegrass band playing when I got off the shuttle, and several servers holding trays of wine. I immediately felt guilty that I wasn’t in the band -- that I was instead part of the mysterious Beautiful People Whose Event Required Live Music. I clapped at awkward moments for the band, while over sharing to a new friend about my parents’ cancers. I met new people. I enjoyed the mountain sunset, and I talked to so many interesting people.
As a matter of endorsement, might I also recommend a Woodford Reserve Manhattan at 10,400 ft? It’s more potent than you would imagine. On that note and on a delicious dinner (where vegetarians were not ignored), I sign off. I rode the gondola back to Telluride alone, soaking up the darkness, and walked from the gondola to my crash pad off the Main Street in Telluride. At the last moment, I thought maybe I should turn my phone light off to scare away the bears (there had been a bear sighting this morning). Just as I turned it on, the motion-detector light of the garage came on anyway.
Goodnight, friends. I see why you like the mountains now.
No comments: Links to this post