Checking in from the depths of newborn-land. We are well. The wee boy sleeps great -- in the afternoon. At night, it's like playing whack-a-mole trying to get the two boys to sleep at the same time. But we are enjoying our parental leave ... David gets a whopping six weeks off! I, of course, get zero paid time off, though I haven't taught any lessons in the two weeks since the new wee boy was born. Next week is Spring Break, so I will probably return to teaching after that. The whole no-paid-leave thing is sitting well with the whole sit-around-and-hold-a-baby-and-try-not-to-order-things-off-Amazon-Prime thing. I guess it's true: you either have time or money.

Frustrating thing of the moment: the newest wee boy does not have a passport. Because he does not have a birth certificate yet. Because the Commonwealth of Kentucky is pokey. This means David and I are sitting around with extended time off and we cannot leave the country. I swear, I'm thinking of driving up to Chicago the day that birth certificate arrives in the mail, just to get a passport same-day, and then checking the international flights out of O'Hare because TRAVEL BUG! But seriously ... how is it easier to get an American passport while living in Europe than it is while living in America?


Happy thing of the moment: David brings me meals and snacks and tea and water, and I don't really leave the couch. This is also sort of frustrating because I don't like sitting still. But I'm trying to obey midwives' orders by not overdoing it.

When Graham turned two weeks old, we took a train to Tantollon Castle, spent the afternoon in a tea shop by the sea, wandering cobblestones and looking at the birds on Bass Rock. When Angus turned two weeks old, I ate four Reese's Peanut Butter Eggs and visited the basement for the first time in a month.

Life is different in America.
No comments:

It's another wee boy!

This may be a complete shock to you, but I had a baby last week. Yes, I didn't even announce the pregnancy until, um, twelve days before he was born. Sorry about that. I've got some work/life/social-media balance issues still to sort out.

He's here, and he's wonderful. His big brother (the less wee of the two Wee Boys) keeps petting him and saying, "Oh, I just love him so much." We still call the baby 'Pretzel' because that's what Graham wanted to name him in utero. And though we did not flee to Scotland to birth the baby (believe me, we looked into travel medical visas, so I could birth the way I wanted), we did give him a most Scottish name: Angus! 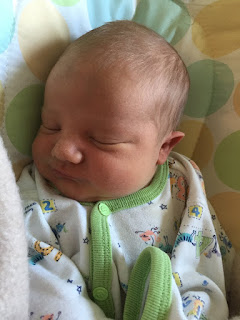 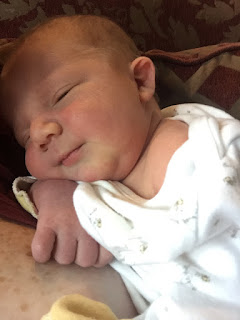 I'll write out the birth story eventually for y'all who like that sort of thing. I have all kinds of commentary on the American maternity care system, having had one baby in America and one baby in Europe.

For now, let me just say that one huge bonus of having a baby in my hometown has been the amazing showering of love and meals from friends and family. While I loved having Graham in Scotland because it allowed us to be insulated and honeymoon with the baby without a constant stream of visitors, I am equally loving being in Louisville this time, where we have been loved daily with visitors and deliveries. I guess I don't actually know what I want, but it's been pretty great. As my husband said: full hearts, full fridge. Thanks for the love, friends. It's been a grand week!

Also, if I haven't responded to your texts or voicemails, sorry. I have 34 unread voicemails and at least as many texts. Trying to babymoon prooperly:)

Graham went to his first concert (the Leith Folk Club in Edinburgh!) at 10 days old, so wee Angus will be following the family tradition. If you'd like to attend, shoot me an email or a Facebook message and I'll get you the information. Space is limited because it's an intimate venue, so RSVPs are required. There are still a few spots left. I will see you there!
9 comments:

Now that I've let go of the big secret, I feel a little lighter. (Except that literally, of course, I feel much, much heavier these days.) I've been trying to enjoy the last month or two of The Wee Boy being an only child.

I know that the majority of the world seems to think that making your child an only child is the worst thing you could do to him -- or spoken in a more positive light, but which I find totally condescending and irritating, a sibling is the best gift you can give him.

Ugh. Sorry, but not everyone loves their siblings. And not all only children are entitled freaks. Also, I happened to absolutely love being an only, and I know I would not have gotten half the opportunities I had as a child (piano lessons, guitar lessons, school trips, university) if I'd had a sibling.

So I'm feeling a wee bit of guilt these days about "de-throning," as someone oddly put it last week, the Wee Boy.

I know it'll be fine, and I know that he'll be happy to have a playmate eventually. Still. He's such a good boy these days, that I just want him to have everything.

Honestly, this 3-year-old is amazing. I am being paid back (with interest) for the fact that he is still not a good sleeper. My friends with 3-year-olds will envy me (much as I envied them their good sleepers), but I don't understand the term "threenager." His tantrums rarely last more than 30-60 seconds, and I honestly don't think he has more than 2-3 a month. It's bizarre how emotionally well-adjusted he is. Truthfully, I have more breakdowns than this kid. We keep being told "just give it a month," but months have come and gone. I think he's just got his daddy's well-adjusted genes...

Anyway, the baby book is too far away for me to make notes about some of the wonderful and hilarious things he has said in the last couple of months, so I'm writing them down for posterity:

"I'm sorry to admit this, but I wiped my hand on the table instead of on the napkin. Sorry, Mom."

"If Daddy sees me wearing mismatched socks, then he will freak out."

"Mommy, I need to be on your pillow in order to properly cuddle you. But just a little bit is showing. Is that okay?"

"Mommy, I am sad because I want to talk to you all night long. But I will be asleep soon, so I won't be able to use words."

Wee Boy: Well, instead of jail, we can teach people how to be better.
Me: Yes, it's called rehabilitation.
Wee Boy: Rehabilitation? Well, bust my buttons!

"Goodnight, Mommy. I love you. There's no person like you in the whole wide world."

That last one ... oh my goodness. I'll boast about him more another time (I swear, he can just about read), but for now, I am just trying to enjoy every minute of him saying hilarious and sweet things because I know I'll be a bit distracted in several weeks. Thankfully, I'm always sleep-deprived, so nothing new there.
2 comments:

I've been quiet on the blog, but I've had four zillion things flying around in my head. Mostly because I've been withholding a big secret from you for many months now: David and I are having another baby. Like, soon. Like, in a month or two.

Partly, I didn't share the news because I wanted to make sure all was well. Then, I didn't really show until around 6 months along. And I've just been holding on to the secret because it seemed anti-climactic at that point. BUT...

The biggest reason for not sharing this exciting (and, yes, it was on purpose) news is because I work in an incredibly sexist industry. A longer essay is in the works, but know that I also learned this lesson last time:

The music business is not interested in pregnant women unless you are massively famous. Otherwise, promoters, bands, even fellow musicians you've known for years just assume you won't want to or won't be able to gig.

I don't believe anyone is being purposefully sexist or exclusive. I had one promoter, upon seeing my belly, actually apologize for booking me, as in: Oh, I'm sorry! I would never have booked you if I'd known.

Yep. And that's exactly why I didn't say anything. I mean, I don't get any paid maternity leave (Yay, America!), so I need to hang on to all the gigs I can get.

When I was pregnant with The Wee Boy, I went on a 6 week tour during my second trimester, before I was showing. I did not tell my tourmate, even though she was a woman, because I did not want to be treated differently. I did not want to create resentment or other issues.

A few weeks into the tour, I had to fess up. We were in Bath, England, at the geothermal pools, and a big sign warned that pregnant women could not go in a particular pool. At that point, I just couldn't lie. Also at that point, the tour changed. My tourmate insisted on carrying all the gear. Insisted on me getting the bed every night. It was incredibly kind of her, but it did lead to resentment that I wasn't pulling my share and that I got the good sleeping arrangements every night.

Anyway, as I've said all along: I'm not sick; I'm pregnant. But check out me, seven months pregnant with the Wee Boy, playing at a BBC station on the remote Isle of Lewis with Scottish singer Adam Holmes:

I'm already worried that this announcement will have a devastating impact on getting bookings for Derby Week and summer festivals. But know that I am 100% capable of doing my job both while pregnant and with a newborn. AND I WANT TO PLAY FOR YOU! I can bring a nanny and a newborn if the gig is in Europe. I can also do that if the gig is down the street. I am pretty good at my job, and I intend on keeping it after this baby comes.

So there we go. Now I can exhale and write the occasional blog about that one time when I sewed a knock-off Boppy made out of the innards of Marianne-the-Crafty-Granny's couch. And how completely messed up maternity care is in America (remember how The Wee Boy was born in Europe? Sigh.) I'll save it, but know that it weighs on me.

Apologies to dear friends who were in the dark on this secret. I swear, I'll let you know when it's born. 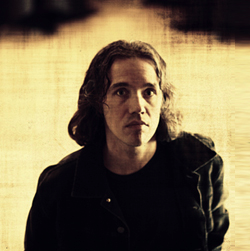 I'm co-hosting a house concert for the wonderfully-talented Jason Wilber, whom you know as John Prine's guitar/mandolin/multi-instrumentalist/sideman. The show is Friday March 25. It's at the beautiful home of some friends, so the tickets are limited.

I admit I feel a bit guilty describing Jason as John Prine's guitarist, when he's an incredible singer-songwriter in his own right. But I'm also kind of a John Prine superfan, so ... also, looking at his 2016 tour schedule, you can see that he's playing places like the Ryman in Nashville in the weeks before he's playing a HOUSE CONCERT IN LOUISVILLE. He's also sharing the stage with people like Iris Dement and of course John Prine and... well, I babble...
Anyway, if you'd like to come, please email me: brigid @ brigidkaelin.com so I can get you the information.
No comments: