Louisville show tonight and on seeing a MOVIE!

This is one of those days where the babysitter will make more than I will. Ah, America! But that is my one and only complaint -- and it's really more of a funny observation than a whinge, I assure you. 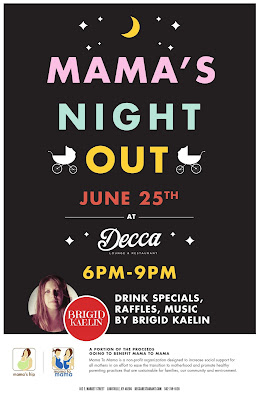 Tonight I'm playing at Decca, in the NULU area of Louisville. The event is organized by Mama's Hip, designed as a once-a-month Moms' Night Out -- giving mamas in the community a chance to get together and have an excuse to get out of the house, have a cocktail, a good time and adult conversation. But it's not exactly a private event, so you can come too! It's free. There will be a signature cocktail, and portions of the drink special proceeds will go to Mama to Mama.

I'll be playing a band show, but changing up the lineup a bit just for fun.

Yesterday my buddy Peter Searcy called me and invited me to a movie. I was afraid he'd given up on me, in one of those Brigid-had-a-kid-and-now-I-never-see-her-anymore kind of situations. Shockingly, I had already hired a babysitter because I had about 14 loads of laundry and several hours of business work to do. This time I listened to the voice in my head that said, "Sod the work -- go to the movies!" And I did. Can you believe it?

We saw JAWS -- the 40th anniversary remastering or something to that effect. Peter is shark-crazy, and he regaled me with all sorts of Jaws trivia. I hadn't seen the movie since I was a kid, which was kind of cool because I didn't remember most of it. Still, I'm not sure why I paid $10 to be scared for two hours. I think I'd rather watch a bad romantic comedy. But at least the music is good -- Minor 2nd anyway? #musicnerdjoke

Okay. Lookie there, if I hire a babysitter, I can write a blog. Was it worth it? Hmmmmm....
No comments:

Day One in New York City.

I took a vacation last week. There were no gigs and no obligations. You see, despite my proclivity for travel, I can count on one hand the number of times I've had an actual vacation in my adult life. David conspired with my parents to fly me up to New York City for a kid-free weekend, which was completely spectacular.
I went to undergrad (saying "undergrad" makes it seem as if I have a Masters, doesn't it?) at NYU, which seems to own most of Manhattan, at least according to the density of purple flags on the lower third of the island. In many ways, it was an absurdly fun place to go to college, but I also rarely ever got to enjoy any of the excitement of the city.
I'm 36 now, and I am, well, employed AND have a partner who is also employed. Even though we are hardly rich, I felt like we were last week -- at least in comparison to my years spent living in the City.
So what did we do?
We did the things I love doing the most while traveling: EAT and WALK.
Cities are magical. I don't understand a beach vacation, when there are so many different and wonderful cities to explore in this world.
Here are some highlights of our first day in the city:
My flight arrived at 8:45am into LaGuardia. I bought a 7-day unlimited MetroCard from a machine and was on the Q70 bus within 10 minutes of the plane arriving at the gate. (Never check a bag, people.) David kept insisting I take a taxi, but he is ridiculous. It would have cost $50, taken longer, and I would have puked in the back from the stop-start-stop-start-awfulness that is an NYC taxi. A quick bus to the train, meant I was knocking on David's Soho hotel room before 10am. Ergo, we were out exploring the City right away.
We mostly wandered around the Lower East Side and the Village, while I pointed out my old haunts and things like "the former Tower Records" to David. Then my mind was blown to see that Other Music still exists (is there cock-fighting in the back? Do they own the building? did they get a Genius Grant?). We bought the new My Morning Jacket CD there, which is purely out of support for brick-and-mortar and our friends in MMJ because we don't actually own a CD player anymore. We'll probably also buy it on iTunes, to be honest. MMJ happened to be playing in NYC that night at the Governor's Ball, but the day-tickets were sold out and I didn't feel like pestering anyone for a ticket. Anyway, we were pleased with ourselves in a yuppie/yuccie kind of way and went about our wanderings. 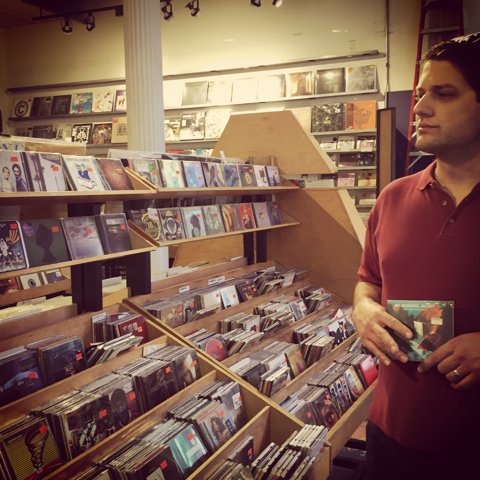 After an attempt to go to the Tenement Museum -- which has gotten a completely makeover/upgrade since I lived there -- we ended up at Doughnut Plant. The Tenement Museum's tours were sold out for the next three hours, and it was $25 a person anyway. Doughnuts are cheaper, plus it was National Doughnut day, which meant a cute tiny free doughnut with every purchase. I like that Doughnut plant bothers to spell out the entire word. Support! The doughnuts we wanted (creme brulee and tres leches) were all sold out, so we got these instead. I don't remember what they were, but they were good. 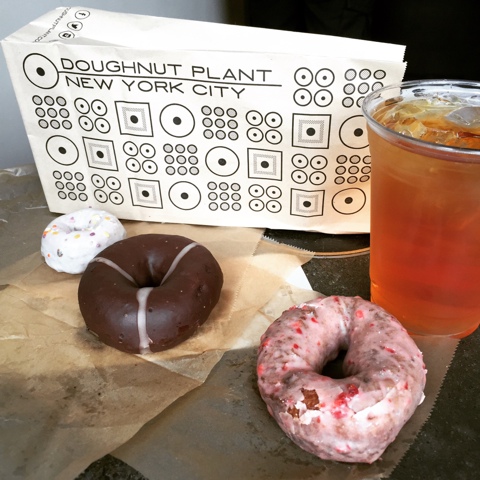 Here's where I 'fess up to being not-my-former-self: I needed a nap. I would normally NEVER take a nap with only a few days vacation, but we were planning a late night. I hadn't slept the night before because of a 6am flight and a two-year-old who was crying out for me to "don't go, mommy. please don't go to New York."
We had reservations at Cafe Boulud, however, and I did not want to be nodding off during that. It's a swanky French restaurant on the Upper East Side that requires super-in-advance reservations, which David thought ahead enough to obtain. I'm pretty sure we were the only people in the place who arrived by subway, but that just mean that we had more money to spend on pre-dinner cocktails (also fairly sure that we were the only people in the place who were on a budget, but whatever.) We both did the vegetarian tasting menus -- six or seven courses, maybe? I can't remember.
David asked the server if the sommelier had any advice on wine, which apparently translated into "we would like wine pairings." When the sommelier arrived with two glasses and a "lovely white I've chosen to go with your amuse bouche," it was too late to ask how much this was going to cost. We had to just pretend we knew what we were doing and went with it. It was an expensive choice, but completely wonderful and the most vacation-like thing I've ever done (I am normally SUPER BUDGET CONSCIOUS on vacation). I got chummy with the sommelier during the sauvignon blanc course by asking him if anyone ever referred to it as "savvy B," at which point David, mortified, kicked me under the table. The 24-year-old sommelier sort of choked a little, but then grinned and said, "No, but I like that, and I might start using it." You're welcome, wine world. Oxford English Dictionary, TAKE NOTE. 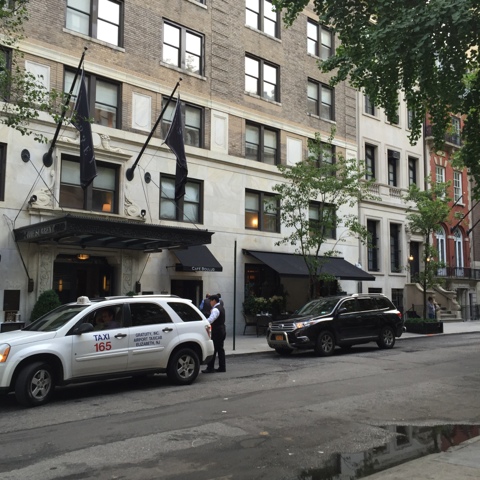 I did not take photos of most of our food, but I didn't care by the time the dessert came out. LOOK AT THIS MAGIC. 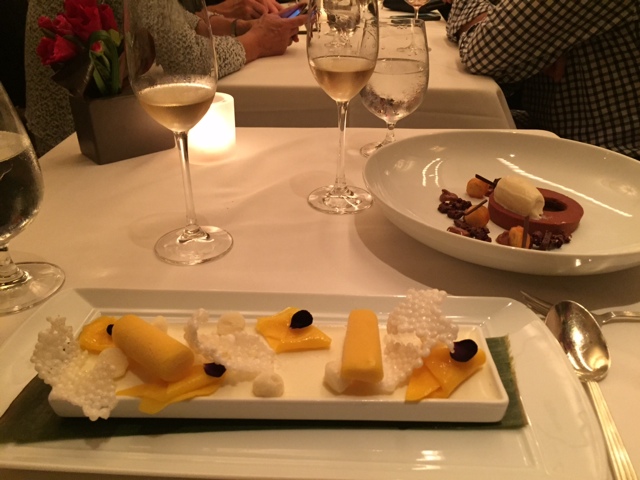 After consuming all the food and all the wine, we took a taxi (we were LATE!) down to the West Village to meet up with some friends at The Duplex, a cabaret club where I played piano on occasion during my NYU days. Check out the insanely-talented Christina rocking out to some Carole King while the piano player works the keys AND the lights. Also, enjoy a photo of Adam, our singing server, entertaining the crowd from atop the piano. 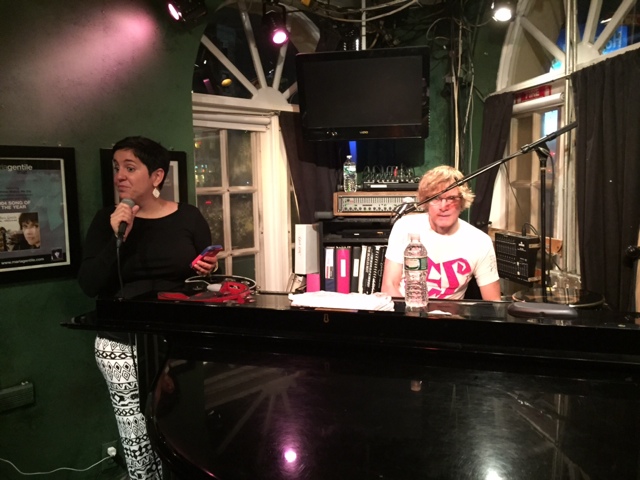 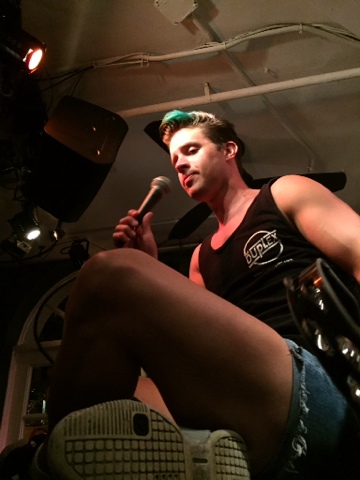 I ended up singing "Crazy," because that was the only country-esque tune that the pianist knew. I forget how karaoke is totally different up north.
Anyway, that was just Day One, so you can see what kind of weekend we had.
1 comment: Links to this post

On Sunday two of the most talented people I know and I did hair and makeup (well, the magical Carrie Chastian did my hair and makeup), played dress-up and did a photo shoot for several hours. Don't let anyone tell you modeling isn't work. But it's a lot of fun too.
They are promo shots for our new Andrews Sisters throwback band -- website and such to be revealed. We are already getting lots of booking inquiries (we are PERFECT for festivals or corporate events), and I'm super bummed we had to say no to a glamorous affair this weekend (I will be out of town).
Joe Mays of Alien Twilight Photography is a photographer extraordinaire, who also managed to get permission for us to shoot by this amazing old airplane that has been at Bowman Field at least since I was a kid. Its door may be held on with duct tape now, but Elizabeth Taylor has flown on it. That's legitimate enough for me.
Here are some pics for your entertainment: 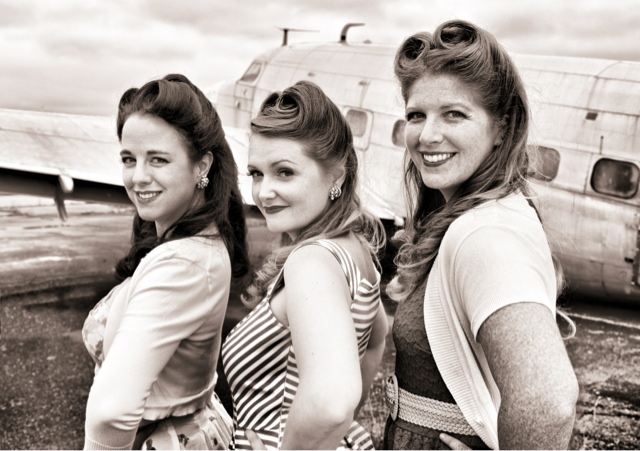 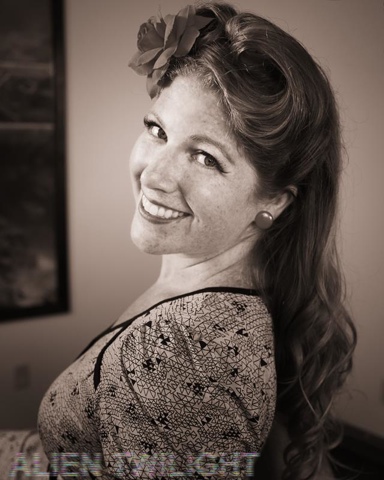 I think I'm gonna make this one a sepia headshot for signing photos when I use that time machine. 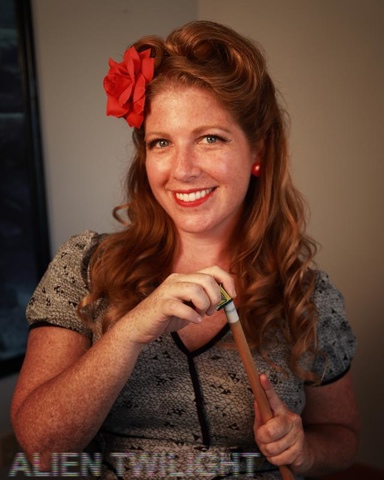 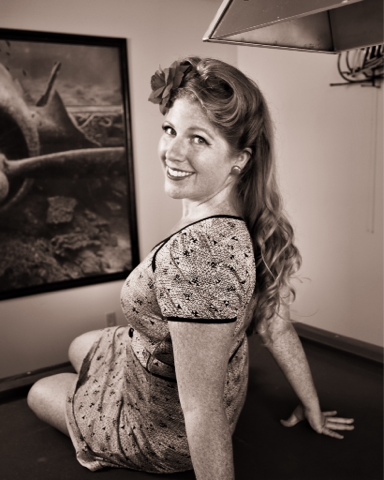 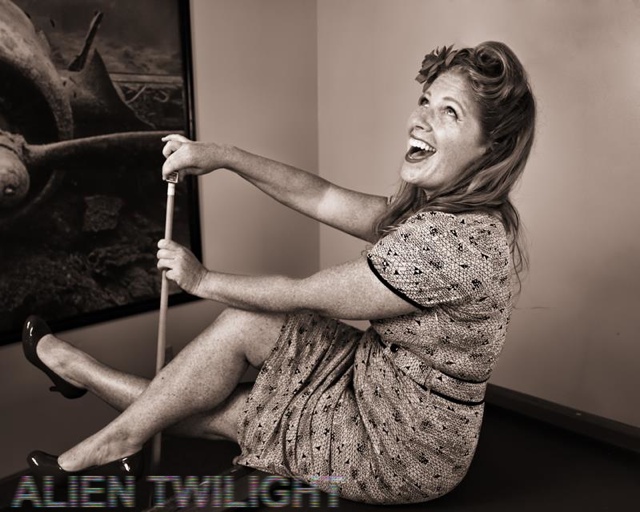 A few weeks ago, I said I was going to use this blog to tell you all about the various meal-planning websites I was going to try out. It turns out the very first one I tried is exactly what I was looking for. I'm not wasting my time with the others. 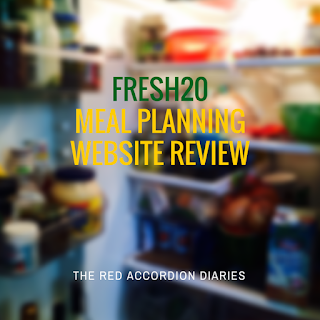 I did some research, looked at websites and their week-long free sample menus. After sampling TheFresh20.com, I looked to eMeals.com next. The first annoying thing is that it requires a credit card to sign up for the free trial. In the name of blogging, I made an account and downloaded the first week's menu -- they do have a vegetarian plan.

My initial reaction was horrible, entirely based on their signup question: How did you hear about us? Some of the options to click were "Dr. Laura" and "Dave Ramsey" which immediately made me want to puke. (I'm sorry, I know many of you love Dave Ramsey, but I think his budgeting plans are just plain common sense. And it's not Jesus who helps you out of debt, but, whatever I digress...) So, yeah, I was turned off my that, but I went ahead and got the menu.

I could tell just by looking at the grocery list that I was not going to like eMeals.com. Like many vegetarian menus planned by non-vegetarians, this one was heavy on the carbs and the dairy -- definitely not a well-balanced, healthful meal. It was also 3-4x the $$$ amount of groceries than TheFresh20 and included lots of processed foods.

I checked out a few other sites. But...

David and I have a lesson we've learned on our many travels. If you see a restaurant that looks good that you think you would enjoy eating in, go on in. Don't walk around for another hour until you get lost and hangry and wish you had just gone on in to the first place you liked.

As I'm a grownup now, which means I take my own advice (most of the time), I'm going to just stop hunting for the perfect meal plan.

What I LOVE about TheFresh20.com (and no, they are not giving me anything to promote them):


I only bought a 3-month subscription because I wanted to see just how long I would stick to it. But honestly, the fact that dinner isn't stressful, that I have enough leftovers for lunch and that it helps me stick to a budget, has relieved so much mental-chaos from my life ... well, I think it's going to stick.