Guns, health care, and this country is stupid.

Today is gross. I swore I wouldn't be an obnoxious Henry James character of an ex-ex-pat -- one who constantly speaks about "how things are in Europe." I've found the cultural jetlag difficult, and I've never wanted to return to the comfort of Scotland more than today -- with the news of yet another tragedy in America.

I won't even go into the gun control issue, though I do hate guns with a passion, ever since my dad had to stay hidden in a walk-in refrigerator to keep away from a madman with a gun at his local pub, 17 years ago this month. One of his best friends -- a man who was already in a wheelchair --  was killed that day, and I'll never forget how my uncle called our house that afternoon and to ask where my dad was. I told him, innocently, that he was up at the bar. I've never been so thankful to not watch the news and never so thankful that my uncle did not tell me why he'd asked.

But despite gun control ... let's talk about mental health.

I've been quiet on the blog lately, mostly because I've been dealing with postpartum depression. How's that for airing my personal life? People don't talk about PPD enough and seeing Facebook posts from other new moms ooohing and aaaaahing over how their 'hearts overfloweth' and they've 'never felt so happy in their lives' only makes me feel worse -- more of a freak, for sure. I know it's normal, prevalent, and chemical, and I know I'll get over it.

I also know that America is THE WORST when it comes to getting mental health care.

And if I -- someone who is educated, pro-active, and wants to get happy (like Judy Garland says) -- can't find and certainly can't afford mental health care on my shitty individual health care policy, how in the world is someone who is severely mentally ill going to even be diagnosed? I would never have been diagnosed had it not been for my home health visitor -- yes, that's right, they send someone round to people's homes to check in on new mothers to look out for and treat just this type of mental issue. I'm quite sure I would have just dug a winter hole and cried myself to sleep every night not knowing what the hell was wrong with me.

Anyway, I don't want any pity here, I really don't.

I'm just sick to death over yet another school shooting. I truly believe things like this could be prevented with universal health care and a country that cares enough to help people who need help rather than making everyone fend for themselves. (update to this sentence: AND ALSO, TAKE AWAY ALL THE GUNS. Yes, ALL OF THEM. I used to think, "no, I don't want to take away everyone's guns," but you know what? After all this insanity, YES, I DO. Humans do not deserve such weapons.)

You want to know about the cultural jetlag? For me, the American way-of-life of fighting-for-what-you-need hit us hard the minute we landed. I'm all for hard work and paying your share, but I do believe that things like health care should not be part of the fight. Just because you're poor doesn't mean you don't get sick. And if you're sick, it's really hard to be a good worker, much less a contributing member of society.

Last year, David and I came up with the most perfect holiday shopping game. We made a deal with each other that we really and truly would not buy each other anything (and we stuck to it!). Instead, we "shopped" for each other and "gave" each other gifts.

Let me explain my quotation marks.

Imagine strolling down the narrow streets of Venice, arm-in-arm, on a drizzly December afternoon.  You pause in front of a shoe store, point to a pair of handmade Italian leather shoes, and tell your partner, "I got those for you." He tells you he loves them, and you both giggle.

It's really a lot more fun than you would think, folks.

This year we aren't in Italy, but we're still sticking to our new tradition. We don't go as far as printing photos of the things we "got" for each other and exchanging them on Christmas morning, but it's pretty fun to text your partner a picture of something ridiculous. Or maybe to spend an hour browsing the internet on a cloudy Thursday afternoon, when there are a lot of other things you really should be doing.

This is what David got for me today (the big spender!): 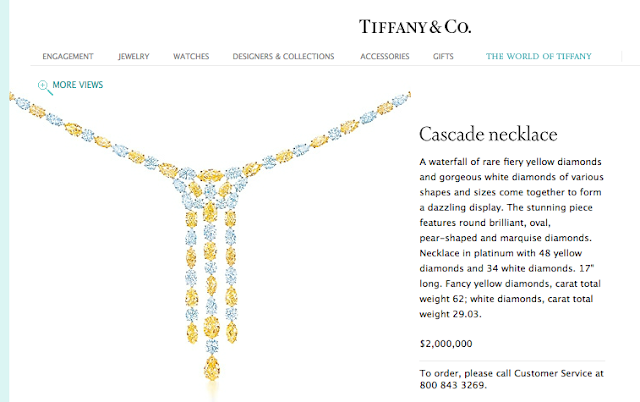 I got him some cashmere and sheepskin driving gloves and a swanky briefcase. Good times!
1 comment: